“Arts without spirituality are merely decoration.”

The Soviet educational system singled out 8 year-old Daud Akhriev for special arts training. He painted and drew under the best painters and instructors for the next fourteen years. This culminated in a master’s degree from the Russian Academy in Leningrad, after an obligatory two years in the Russian army. Though representational in orientation, Russian Academic philosophy creates a system which encourages sampling, experimenting, and referencing styles and techniques from all of art history. Akhriev is an artist with public works in mosaic, oil on linen, water media, cast bronze monumental sculpture and ceramics. He is comfortable working in decorative styles, designing fabrics and patterns, and is equally at ease switching into Old Master oil painting. He admires Rembrandt and Schiele, Moser and Mailloll, Velasquez, Sargent and Corolla. Akhriev is an Ingush born in Kazakhstan to liberal Muslim parents, educated in a Russian, atheist-communist system which emphasized the Catholic artworks of the Renaissance, and he is married to an American of protestant heritage.  He is old-school and experimental. He creates Episcopalian murals about St. Peter with as much passion as he references the souks of Marrakech. His tiles with saucy, half-nude flamenco dancers in ceramic are very different from his plein aire watercolors of the lake district in northern Italy. He is a sports fan, and loves film and travel. He speaks Russian, Ingush English, and basic Spanish. His extracurricular passion is teaching young artists. He resides in Tennessee and Andalusia, Spain with his artist wife, Melissa Hefferlin.

Sponsored by the Portrait Society of America 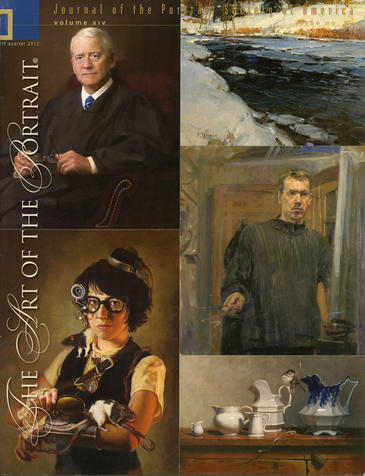 ...dedicated to promoting fine art portraiture and figurative works through publications and programs